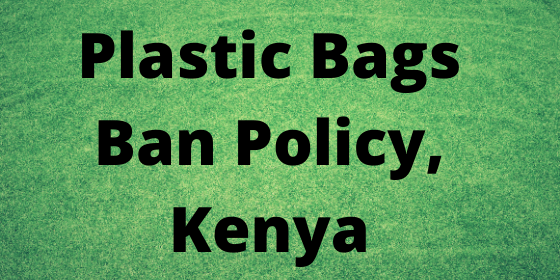 It’s been four years since Kenya’s ban on single-use plastic carrier bags took effect. A well-intentioned policy that is meant to address the plastic pollution menace affecting Kenyans and the globe.

The ban prohibits importing, manufacturing, or selling single-use plastic carrier bags, whether with or without handles. The regulations have specified the items exempted from the ban.

Over time, compliance and adherence to the policy have reduced, evidenced by the increasing presence of clear plastic bags in the markets (mainly used by small traders- grocery vendors).

Often, the effectiveness of a policy requires continuous implementation. Adoption and integration into everyday activities are progressive-sometimes slow. In the case of the plastic ban, implementation was short-lived. We see banned plastics being used openly. Does it mean that the NEMA office, which is key in implementing the policy, has no inspectors and officers on the ground? What are the inspectors inspecting?

Open usage of the banned items means they are manufactured illegally within the country or get in illegally. Is the “no manufacturing, importation or sale” of banned plastic bags active?

For this policy to serve its intended purpose, it is crucial to reactivate consistent implementation across the country, which can be done in collaboration with the county governments.

In the initial stages of the ban, there was a resistance that saw several petitions against the ban submitted in the court of law, especially by the private sector. Such, in part, means the private sector was not widely consulted. Effective policy implementation is possible when several actors are consulted for their thoughts to promote inclusivity and easy compliance.

Behavioural change among the citizens is influenced by adequate awareness creation and sensitization. The accepting nature of the citizens to use plastic bags either as a retailer or consumer is an indication the ban is not being taken seriously; the majority are less informed on the contents of the policy or implementation is lacking.

It could also mean that the citizens are not informed on the importance of the ban to the environment, their health, and sustainable development.

Thus, strengthening public sensitization is crucial in promoting behavioural change as it has a direct effect on adherence.

Measuring the effectiveness of a policy is essential in order to make concrete decisions. Policies are not rigid and operate on specific guidelines or regulations. Regular monitoring and evaluation of the compliance provide an avenue to establish gaps in the policy, areas with weakness, and find solutions. Four years down the line, we should have several assessment reports detailing how the policy is performing. We could be reading about why banned bags are still in the market, the genesis of that, and the measures the county departments of environment, ministry of natural resources and forestry, and NEMA are doing to address the issue.

We should be seeing increased engagements with the private sector—especially manufacturers-on how to reduce the use of non-biodegradable packaging bags.

NEMA needs to carry out internal and external audits of the progress of the policy and take urgent actions that include amendments to cater to the existing gaps identified.

The ban’s execution gave rise to other single-use plastics that are weakening the vitality of the policy.

The mesh bags that emerged immediately after August 2017 are causing a lot of environmental challenges. The formulation stage of the policy could have foreseen the occurrence of such items and included them in the banned items. Better still, the policy can be amended to incorporate these items.

Similarly, the emergence of the ‘Uhuru bags’ that were initially believed to be alternatives to the banned carrier bags was a bad idea. The bags do not serve the imagined purpose because of their quality, recyclability and degradability. They are more of a nuisance. The policy should have been more specific and restrictive. The policy could be amended at this stage.

Lack of political goodwill is a challenge curtailing the implementation of the plastic bag ban. Rarely do you hear/see political leaders or business leaders drumming support of the policy or providing alternative solutions!

Similarly, citizen responsibility for addressing plastic pollution is low. With proper sensitization, more citizens could take up the personal initiative of refusing plastic bags and any other single-use plastics, reducing the generation of plastic waste and recycling plastics. Most of such citizens could also be environmental watchdogs, point out a mess and have the perpetrators take accountability for their actions. Polluter pays principle.

From my observation, active implementation is needed for the ban to make sense.

Despite the Ban, Plastics are Choking Protected Areas

Caroline Kibii is an environmental scientist, research consultant and a policy leader fellow

Air Pollution in Nairobi City: Sensitise the Public
12 months ago