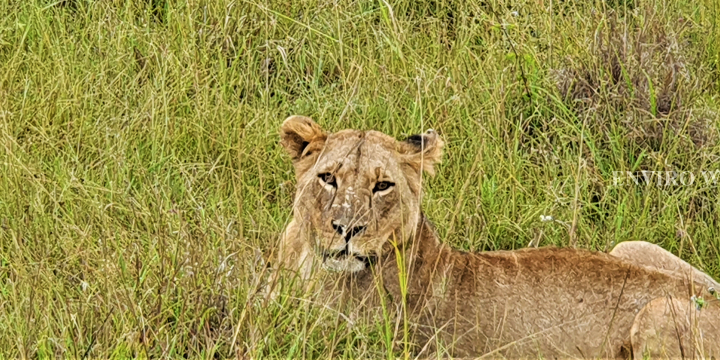 It is no longer your typical mornings at the Nairobi National Park. The park, which is considered the only park in a capital city in the whole world, is now the center of focus for many city residents. The partial lockdown due to coronavirus has prompted many to venture in safari drives within the Nairobi National park.

Most safari drives begin at 6.00 am when most animals are within a close watch. However, with the pandemic, trips start slightly late because everyone entering the Kenya wildlife service premise must have their body temperature checked. Taking precautions against Covid-19 is mandatory.

Before the pandemic, the park recorded few people going on game drives. The contrary is happening now. It is jammed. It is exciting and thrilling for many as they search for the big-5. Rarely do you spot all the big 5—the lions, rhinos and buffalos are common while the leopard is rare and the elephants are not there.

Like other countries across the globe, Covid-19 prompted a ‘new normal’ full of restrictions, curfews, and cessation of movements. Nairobi Metropolitan area is a victim.

It is because of coronavirus that safari drives within the Nairobi National park gained popularity among Kenyans and tour companies.

It took the pandemic for most Kenyans to realize the gem staring at them.

Since its establishment in 1946, the Nairobi National Park is home to many animal species. The 117Km square area hosts 3 of the big 5, birds alike.

Lions: Lions are easily sighted very early in the morning. You will see the lionesses and their babies hiding in the grass. The demeanor they portray is a clear indication they are used to humans; they are not intimidated by the several vehicles crowding their surroundings.

Rhinos:  You will see the white rhinos often grazing as a family. Rhinos are endangered in the world. In February 2020, a new addition to the white rhino family was announced by the KWS- a baby rhino was born within the park.

Birds: Birdwatchers have a good opportunity to see different bird species. The best time for birdwatching is early in the morning. Besides, the park hosts the fastest bird on land- the ostrich as well as the guinea fowls, among others.

Antelopes: The hartebeests, impala, Thomson’s gazelle, and dik-diks are common within the park. The savanna grassland vegetation, which defines most parts of the park, is favourable for the family Bovidae species.

Giraffes: Giraffes are in plenty. You will spot them walk and graze in groups or as lone rangers.

Despite the significant value of these animals, they are under threat from human greed and encroachment.

Nairobi National park has and continues to be a source of controversies among the citizens and the government, conservationists, and business developers. Regardless of the value, it adds to the economy, defining the city and enriching nature, new developments keep coming up.

Standard Gauge Railway (SGR), for example, was the first of its kind that elicited a tug of war between the government and the environmentalists. Despite that, construction continued, and the railway line now passes inside the park.

The SGR is of economic benefit, eases transportation between Nairobi and Mombasa. What was ignored is the safety, comfort, and habitats of several animal species that consider the park their home.

It is not easy to quantify the number of animals killed during the construction process or are hit by the cargo and passenger trains.

Nonetheless, it is easy to notice that wildlife displacement, habitat destruction, fear, and discomfort are the outcomes.

Proposed New constructions:  as of June 2020, a new development had been proposed within the park. Such new eateries, residential, and hotels within the park are anticipated to cause more harm than good to the environment and the wild animals.

There is a lot to worry about with the trend of new developments inside the park. If authorized, then the new hotel will add up to the already existing resorts that continue to deprive nature of its exclusivity.

Tourism is one of the primary sources of revenue in Kenya. The Nairobi National Park is just one of the many sanctuaries, conservancies, national parks, and marine ecologies that attract multitudes of persons from all over the world each year.

The park is unique in that it is accessible to many people on transit or layovers. Thus, the motivation to put up developments within the park will boost the economy is ill-informed. Any development should not be allowed because it will negatively impact the biodiversity, which is the fundamental component of the park.

The natural beauty of the park will be lost. Rare animal and plant species will be endangered or driven extinct.

Promoting a sustainable environment is the only option for the survival of the park. Thus, upholding the newly established ban on single-use plastics has been effected in the park. To this effect, no plastic water bottles are allowed inside the park.

Previously, the law banning plastic bags was introduced in Kenya. To date, the amount of plastic wastes has significantly reduced.