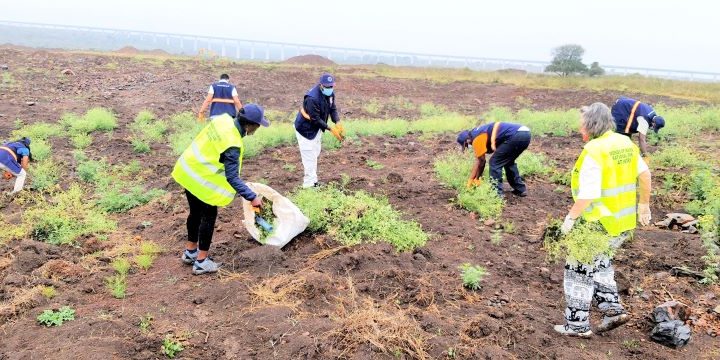 The joint effort by the members of the two groups evidenced the need for strengthening partnerships in advancing conservation activities in protected areas and especially at the Nairobi National Park.

Despite the rains, the team, which included young children, bravely pulled out the parthenium that had grown in some of the disturbed areas in the park.

Parthenium hysterophorus is considered an invasive weed that has the ability to colonise disturbed areas aggressively.

The Centre for Agriculture and Bioscience International demonstrates that the weed was introduced to many countries in Africa, Asia, and Australia and has become a threat to agricultural production, humans, and biodiversity.

Further research shows that Parthenium hysterophorus has unquantifiable economic significance and that it is unpalatable to cattle.

Going by the existing knowledge and scientific evidence, environmentally-friendly and sustainable ways of controlling the weed are fundamental.

An environment-friendly way being applied currently at the Nairobi National Park is pulling out the weed while still young; often before it flowers as an efficient approach to limit seed dispersal.

Similarly, biological control of the weed has been applied in other parts of the world, like in Australia and Asian countries, reporting success; however, that is unfavourable in conservation areas where biological diversity is being promoted.

It is apparent that at the Nairobi National Park, Parthenium hysterophorus favours disturbed areas. Undisturbed areas have not been invaded. This, therefore, should be a basis to stop distressing the park to reduce the weed’s growth and spread.