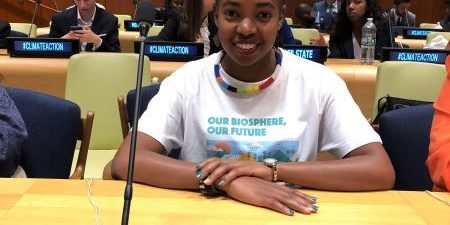 I am the founder of TLC4Environment, an environmental initiative based in Kenya with an online presence focusing on environmental awareness and campaigns mainly in environment and climate change. TLC generally stands for tender, love, and care!

I founded TLC4Environment back in 2012 when I was an undergraduate student at Kenyatta University. During that time, I used social media; Facebook and Twitter, to create environmental awareness. 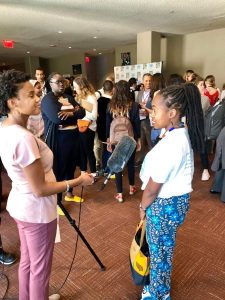 Louisa Chinyavu during an interview at a past Climate Change summit

Other than that, I represent youth and women in various environmental dialogues. For example, I represent the Malindi-Watamu Arabuko Sokoke biosphere reserve as a youth delegate of the Man and Biosphere (MAB) programme of UNESCO. In this role, I participated in the UN Youth Climate Summit,  MAB Youth Forums, and Youth Encounter on Sustainability (YES) Lab and received a Conservation Leadership Programme (CLP) award in 2016.

Beyond TLC4Environment, I work in the environmental conservation space

My Work and Its Impacts

TLC4Environment is a community-driven environmental initiative. Thus, the communities we collaborate with, for example, the Mihingoni village in Kaloleni constituency Kilifi county, is now more aware of issues such as climate change and is willing to participate in decision-making processes on environmentally-sensitive projects actively.

TLC4Environment has participated in implementing environmental initiatives such as environmental education programs, river clean up and tree growing activities in various parts of the country.

Besides, I have organized environmental activities, involving youth groups in tree growing and river clean-up exercises, such as at the River Gathara-ini; collaborating with Ecopro Initiative in supporting conservation efforts at Ondiri Swamp and facilitating a Climate Change Concert held in September 2015 in Nairobi, which created climate change awareness in Kenya ahead of COP21.

I have also used my voice on mainstream media to create environmental awareness and call for climate action.

TLC4Environment has been an integral part of Maji Yaje Kwanza, a community project I co-founded in 2014. It focuses on supplying clean water and sanitation services to public primary schools in villages in Kilifi County

I am always excited when someone reaches out for environmental partnerships or mentorship. It assures me that I am making an impact on creating awareness and encouraging the masses toward environmental stewardship. I believe there is also increased youth engagement in environmental dialogues, some of which I have been personally invited to

A significant drawback is a poor negative attitude towards conservation- convincing others that conservation is as important as other disciplines and requires attention can be tough!

Similarly, mobilizing resources for implementing conservation projects is a challenge.

You don’t have to be an environmentalist/conservationist to contribute towards the protection of the environment!

To influence positive change in your daily activities, it is essential to incorporate environmental considerations and merge lifestyles with nature conservation.

Read more about women in conservation

Can Climate-Smart Agriculture Be A Solution to Agri-Food Systems Resilience Building and Greenhouse Gas Emission Reduction? An African Perspective
8 months ago