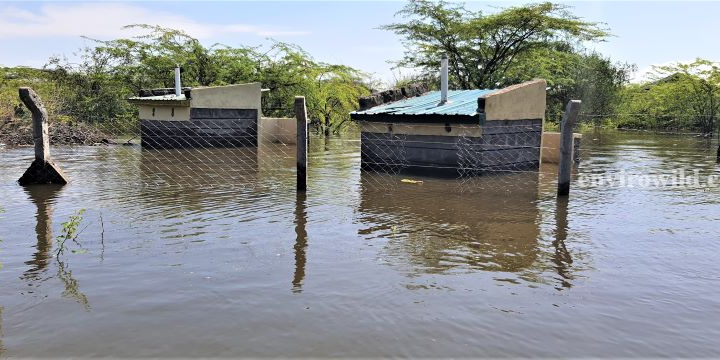 Lake Baringo, a freshwater lake, is famous for its islands, unique bird species, hippos, and crocodiles. The lake region is inhabited by diverse communities from the Tugen, IlChamus, and Pokot communities.

The lake’s glory is diminishing day by day as its levels rise alarmingly, swallowing offices, restaurants, homes, and schools. Several families have been displaced.

As to how many meters the lake has been rising each day is unknown because there is no official documentation.

Just like Lake Bogoria, Lake Baringo’s levels have been rising since 2013. On several occasions, as narrated by Moses Kandie, a renowned birdwatcher from the area, the lake receded within the last seven years. However, 2020 has proved otherwise; levels have risen beyond expectation, causing havoc.

It is unknown exactly why the lake levels have increased as is now. Many theories and speculations have been coined. The people are confused, not knowing what will happen in the coming days should the water level keep rising.

Indigenous knowledge: Seeking to understand what the older generation thought about the current state, none could comprehend what is happening.

Some locals claimed that in the 1980s, there was a hole that drained water underground, a feature they no longer see.

What is the cause?

The question lingering in many minds is, ‘what is the cause?’

The damage is mega. The mainland and the islands have been affected in equal measures.

Almost all the structures close to the lake’s shores have been destroyed, some completely submerged while others are partially submerged, allowing the custodians to retrieve a few items.

Almost ten schools have been affected, fearing that thousands of pupils and students will be locked out of school when learning resumes.

Electricity is a luxury to many now. Power had to be switched off in some parts because electricity poles are almost falling, wires hanging loosely.

Being a tourist destination, several hotels and restaurants had been appealingly constructed around the lakeshore. Most of them are beyond recognizable as their roofs are the only parts visible. Despite the efforts of erecting high barriers, the works of nature could not be stopped.

As a result, some hotels have been forced to close business. Some are demolishing those structures and tents closer to the shores to reduce the risk of losing all.

Offices: Government such as Kenya Marine and research organization are victims. Their structures have been heavily impacted.

Displacement of People: Several scores of people were displaced. More are being rendered homeless as the water level keeps increasing. Homes drowned while the property was destroyed. The displacement is not only a physical disturbance but is psychological and emotional torture to many, as demonstrated by Mr. Kandie.

Fishing: Fishing goes on in most parts of the lake. However, some regions are disadvantaged by the vegetation floating on the lake. For fear of losing the nets, some fishermen told Enviro Wild they are selective on where they cast the fishing nets.

Hot springs disappearing: It is less known to many that Lake Baringo has hot springs on the shores of the Ol Kokwo Island. Ol Kokwo Island is one of the islands largely inhabited and has been affected by the floods.

At the time of our visit, only one hot spring could be seen, the rising waters have covered the others. The only indication of the existence of hot springs around the area are bubbles.

Preying Crocodiles– Lake Baringo is home to Nile crocodiles. For many years, reports show that crocodiles have killed people and livestock. It is worsening due to the lake floods. The water is close to many homes.

Case in point, as witnessed during the trip, was a crocodile about 2m away from a lady washing clothes, goats drinking water, and dried fish. It is unknown whether the crocodile was targeting to devour the lady, goat, or the fish. We spent 20mins monitoring the crocodile, which reemerged four times during the time.

On two other accounts, we encountered more crocodiles close to homes.

The encounter signals the dangers the island communities are subjected to during the floods.

On whether the locals kill the crocodiles upon causing havoc, we got no response to this.

Insecurity: Lake Baringo is a resource shared among three main communities. Some parts of the lake are not safe to explore because of the retaliatory attacks. Hence, it was impossible to monitor the effects of lake flooding on the side of the community argued to be hostile.

Lake 94 is a small lake that was formed in 1994. The lake formed naturally due to heavy rains and the bursting of two river banks. It lies alongside Lake Baringo. Lake 94 is now flooded and has extended its boundary, becoming part of flooded Lake Baringo.

Using plastics instead of wooden oars

One may call it innovation, but the fishermen and lake dwellers say it is the only alternative for their daily operations.

Wooden oars have been used far and wide for ages. Lake Baringo residents claim the tree used to make the oars have disappeared from the lake’s shores. They link the disappearance with too much water. They assume that the tree does not do well in marshy areas.

It is a new trend in Lake Baringo, with the argument that it is cheap, light and can be cut-off from many plastic items.

Environmentally, using such plastic items is a disaster in waiting.

Speaking to 4 fishers, all of whom were using hand-held plastic oars, they informed us that they always carry with them spares if one floats away in the middle of the lake.

For them, it is not an environmental concern; their priority is meeting their livelihood demands. With such a mindset, plastics will pile in the lake hindering normal aquatic functions.

Water Hyacinth: Water hyacinth can be spotted close to the shores of Lake Baringo. Our respondents opined that the water hyacinth does not thrive well in Lake Baringo waters. This is a plus to them because their water operations could have been impaired.

Disallow the use of plastic containers in place of wooden oars to avoid piling plastics in the lake. We are at war with plastic pollution.