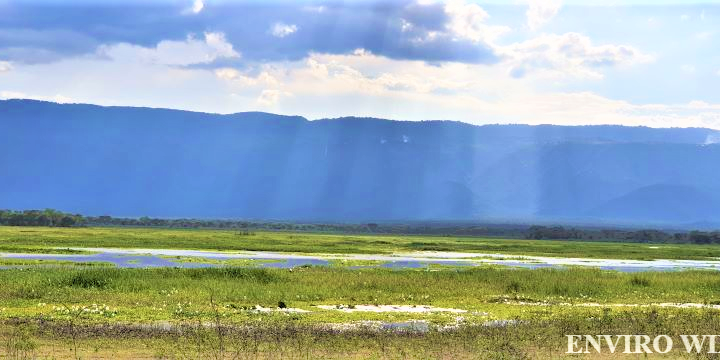 From a unique attraction; point for bird watching, crocodiles, and its ox-bow shape to a playing field. Lake Kamnarok was once in the limelight for good reasons.

It attracted the attention of local and international tourists. Many flocked to watch birds and animals such as elephants within the Lake Kamnarok National Reserve (gazetted in 1984) and Kerio Valley National Reserve, more so, the crocodiles. The lifestyles and setups of the people living around the lake were also appealing to many.

That glory is gone! The lake has been drying regularly. Two fishermen told Enviro Wild that in 2013, they were playing football on what was once the lake. It was dry.

Restoration of the Lake

In 2014/15, the county government of Baringo that is the custodian of the resource embarked on the lake’s restoration.

A simple mechanism was used; few gabions and soil-filled plastic bags were used. The strategy has worked, although short-lived; the sacks are worn out.

Isaack, a fisherman and a resident of the area, said the idea was too simple and came from the locals claiming that the county government had no solid ideas. He says it is more of a trial and error, no commitment.

Ever since the reclamation exercise, the lake reemerged. Despite that, the lake has been receding. While the primary cause of shrinkage is unconfirmed, lack of conservation initiatives is a likely major factor. It is clear from observation that the lake is dying.

The residents fear the lake might disappear again. In fact, on two counts in recent years, families of elephants got stuck in the mud when the lake receded.

Despite their fears, they hold reservations as to why they are not engaging in community-led conservation strategies.

Reasons attributed to the shrinkage of the lake

There is undeniable evidence of intensive farming close to the lake and along the feeder rivers and springs. Ever since the declaration of the land around the lake as community land in the late mid-90s as per the residents, the population has swelled continuously. Meeting the needs of the increasing population means a need for more agriculture fields.

Enviro Wild interacted with the residents, who alleged that the area around the lake is the principal source of food for the community; without farming, the people will go hungry.

No conservation tillage measures being applied in the farms; this means the soil is not protected from wind and water erosion.

Herding: Kerio valley being an ASAL (arid and semi-arid lands) area; many people keep local and cross-breed livestock in large numbers. Grazing takes place along the feeder rivers and around the lake. The pressure exerted on land loosens the soil making it prone to erosion. The eroded soil ends up in the lake.

Deforestation: The climatic conditions and the soil of the areas around Lake Kamnarok can support a few tree species. The common trees in the area are the acacias. Unfortunately, they have been cut down for charcoal burning, fencing, firewood, timber, settlement, and agriculture. There is hardly any vegetation apart from a few grass and short shrubs.

Siltation- (associated with a new road constructed): A newly-constructed road (yet to be completed) from Oinobmoi-Salawa-Katibel and beyond is blamed for the lake’s increased siltation. Five of the residents I spoke to strongly believe the silt deposited in the lake was carried down from the massive road construction operations.

Mr. Chongwo, a high school teacher who guided our trip, said based on his experience and observation before and during the road constructions, a lot of soil has been deposited in the lake.

Lake Kamnarok is choking with water hyacinth. The weed covers nearly the entire lake. Efforts to remove it by the county government of Baringo was futile. The residents said they are not sure how the weed found its way in the lake. However, they perceive tourists might have deliberately brought it.

What is Hindering Conservation?

There are NO active strategies to conserve the lake!

Since the locals attribute no benefit to the lake and are asked to stop farming along the rivers and lakeshores with no compensation agreements, they counterattack by taking no initiatives to conserve. They go about their activities around the lake (farming, herding, charcoal burning) as if nothing is happening.

They argue that the land around the lake is their primary source of food.

Several homesteads live within the boundary of the nature reserve. Because of the lake, many animals such as Zebras, hyenas, elephants, and waterbucks from Rimoi conservancy cross over to the Kerio valley reserve. Similarly, when the Kerio River dries, several animals migrate towards the lake region.

The residents have lost livestock and crops to hyenas and elephants. Some openly said they have no mercy for hyenas because they can kill more than 20 goats at once.

Most of the respondents said, “antelope is vegetables’’ to them. Hence the hunt.

Lack of proper representation of community members during planning meetings about the lake and the reserve triggers resistance. Their participation and consultation would help ease the tension and soften their attitudes towards conserving the diminishing resource.

Land is a controversial issue in Kenya. The Kerio Valley National Reserve is a point of contention between the county government and the local community. The community holds that the land is theirs; consequently, they feel they should not be forced to vacate without compensation.

As I write this, several families live within the reserve; carry out their activities as usual. Without resolution of the land issue, it won’t be easy to conserve the lake’s ecosystem.