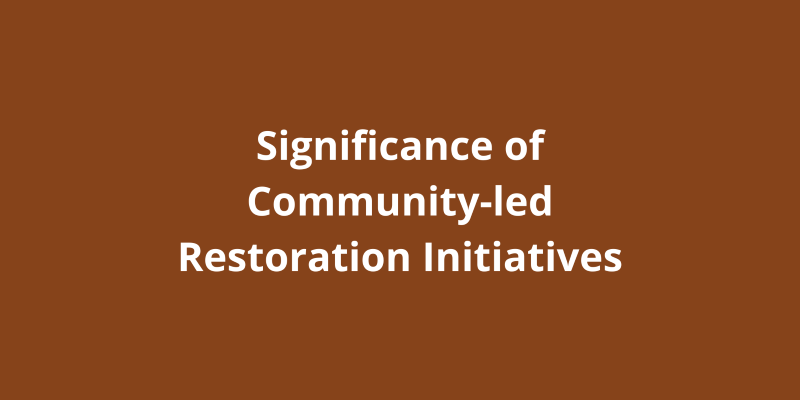 According to the 2018 assessment on land degradation and restoration by the Intergovernmental Science-policy Platform on Biodiversity and Ecosystem System (IPBES), human activity is responsible for degrading more than three-quarters of global lands. The result is the loss of ecosystem services and biodiversity, which have been said to cost more than 10% of GDP.

It is said that by 2050, land degradation will cost both Asia and Africa a towering US$23 trillion. This effect goes beyond economics and will soon become a security issue as depleted harvests as well as loss of livelihoods can result in migration and worse civil unrest.

Such statistics only prove that there is a need to involve communities in the land restoration process. One example of this community-based initiative is being championed by Patricia Kombo, a young social entrepreneur whose work was recognized by UNCCD as a land hero. Patricia realized that there was a gap in knowledge sharing where people were doing things because they found them doing them. They are now working to change their mindset and also how they can restore their farms.

“We also teach them on how they can farm sustainably,” says Patricia during GLF digital conference on land restoration.

“We have also began a project known as community tree nurseries to enlighten the community on the importance of growing trees and also cultivating sustainably,” she added.

She is also working with communities and young people, whereby they harvest indigenous trees during the dry season and then plant them in nurseries.

“It is a collaborative approach where all women join their hands, and these people grow the trees in forests that have been degraded. They also issue farmers with trees suitable for agroforestry,” she explains.

Patricia adds that the community must be involved as without them, they will never understand the significance of restoration.

“We are looking for an approach that is less costly and use locally available materials that the community has because land is limited so we use basins. We have started working with them to have kitchen gardens because of issues to deal with land and climate crisis,” she said.

Soil Systems Scientist, Leader at Land Health Decisions World Agroforestry (ICRAF) Leigh Winowieki also emphasizes the need to have communities at the center of every project.

“The combined impacts of land degradation and climate change means that landscape restoration is required at an urgent scale and this cannot be attained without involving farmers and communities directly in this restoration process,” she says.

Leigh notes that land restoration is all about accelerating co-learning to increase the impact on the ground and ownership of the project. For instance, the organizations involved can use approaches and tools matching restoration options to the context of the situation at hand.

“Farmers-led innovations of the options can also be impactful. They actually tailor the restoration options that suit their context.  There should also be an assessment of performance, including the financial investments to improve interventions. The evidence received from the assessments give tools for co-learning to share on learning to inform action,” she explains.

While she agrees with the fact that the projects need to involve the communities, Lucy Mulenkei, Executive Director of the Indigenous Information Network (IIN), also adds

that the schools and communities should be trained to learn to take up data.

“If you look at the drylands and those degraded lands that are totally damaged, they are usually in places with no great access or infrastructure, but if schools and communities are living there, then they should be considered and integrated into the project of land restoration,” she says.

“Women have been able to come together, learn and restore land effectively in these remote areas like Marsabit and Pokot. But there is still a huge chunk of land remaining that needs restoration, and this needs a lot of work.”

Through her organization, Lucy also encourages the communities to adopt organic farming, such as kitchen gardens. Because of land tenure, pastoral communities are forced to change their way of living and get into farming.

Forests and Human Health: A Look at How Forest Degradation Affects Human Health
3 months ago